Everyone knows that you can’t go wrong with a MICHELIN® Tire. Since 1889, MICHELIN® has been one of the largest tire manufacturers in the world and makes a tire for just about anything that uses them. Always at the forefront of cutting edge technology, in the 1940s MICHELIN® introduced the world’s first radial tire, a tire so superior to the competition that now all tires sold in the US from all manufacturers are radials.

When you need new tires, see what Royson's Automotive has to offer. Not only can we repair or replace your tires, but our experts can also explain to you why your tires wore unevenly and make professional recommendations of adjustments or repairs to fix the problem so you get the maximum life from your tires.

Do your tires have uneven wear or did they wear out quicker than expected? When you install new tires you will also want to take advantage of our state of the art alignment service that will help to ensure you get the maximum life from your tires.

We also suggest you take advantage of our Nitrogen fill service for your tires. Using Nitrogen in place of regular compressed air improves tire wear and gas mileage. Nitrogen keeps your tires running cooler and does not leak off as fast as air.

At Royson's Automotive we take pride in the high-quality MICHELIN® tires we install for our valued customers. Getting the best performance and life out of any tire requires that all the mechanical systems that affect tire wear are in good condition and set to proper specifications. The menu below will give you a brief description of a few of the systems you need to be aware of.

From summer driving to off-roading, MICHELIN® has you covered. The next time your vehicle needs new tires, drop by Royson's Automotive and let one of our expert mechanics upgrade you to a set of new MICHELIN® tires. We’re sure you’ll recognize the difference that quality tires make. 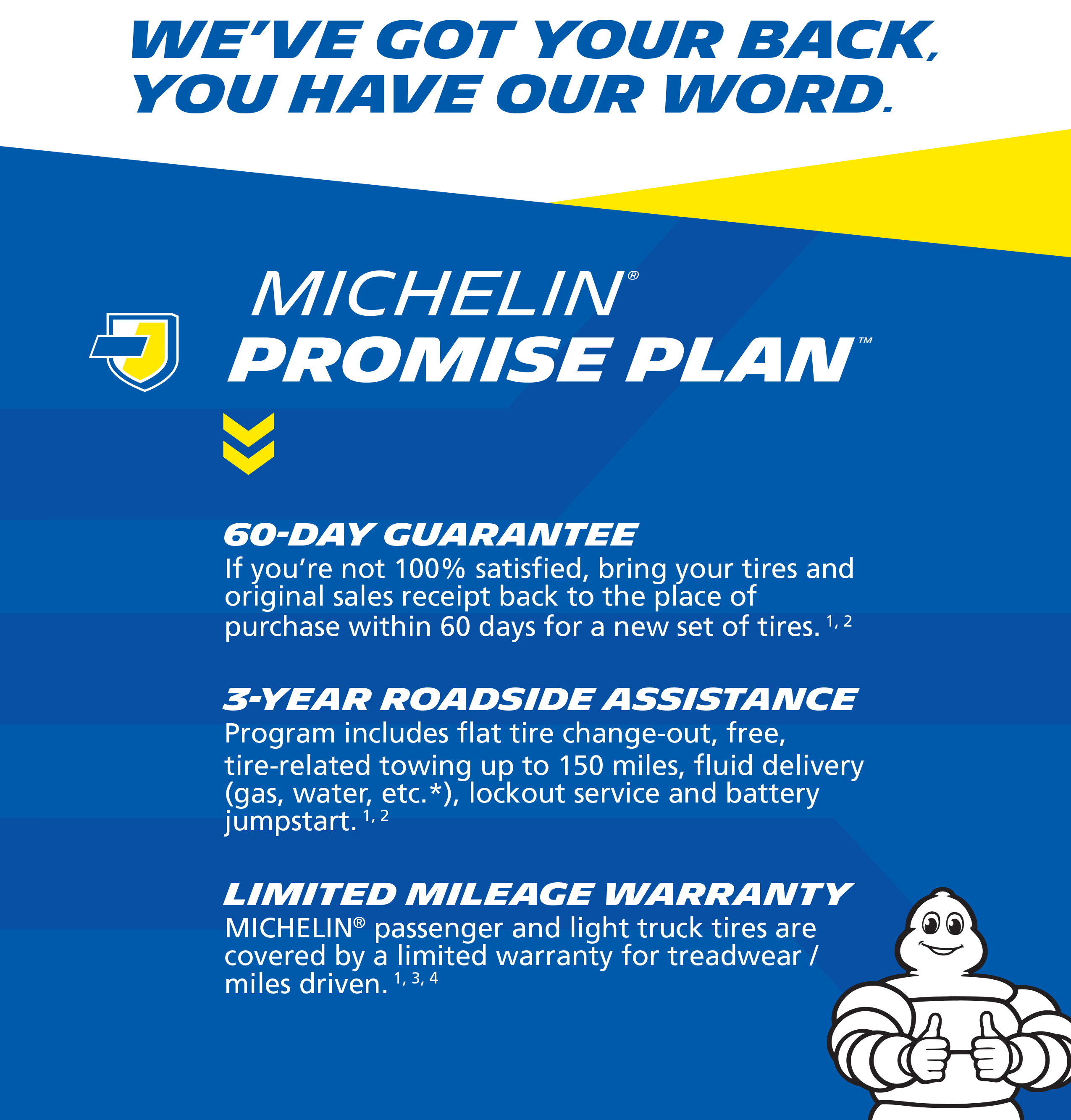 WE'VE GOT YOUR BACK, YOU HAVE OUR WORD.

60-DAY GUARANTEE
If you’re not 100% satisfied, bring your tires and original sales receipt back to the place of purchase within 60 days for a new set of tires. 1, 2

² All tires eventually wear out and should be replaced. Half-worn Premier® tires are safe because of EverGrip™ Technology, which combines an evolving tread design with a high-traction compound for enhanced stopping capabilities. Based on internal wet braking tests from 50 MPH vs. Goodyear® Assurance® CS TripleTred™ All-Season and Continental CrossContact™ LX20 tires in size 255/55R18 109H; using the MICHELIN® Premier® LTX® tire in size 255/55R18 109H buffed to 5/32" of the tread. Actual on-road results may vary.

MICHELIN® IN THE UNITED STATES

MICHELIN® North America is a $10.76 billion dollar a year company operating 19 plants in 16 locations and employs 22,000 people. It manufactures and sells tires for airplanes, automobiles, farm equipment, heavy-duty trucks, motorcycles, and bicycles. MICHELIN® manufactures tires in six states: Alabama, Indiana, Ohio, Oklahoma, North Carolina, and South Carolina. In addition, there are three plants in Nova Scotia, Canada, and one plant in Queretaro, Mexico. Two plants specialize in the manufacturing of semi-finished goods taking raw materials and turning them into components for the plants that produce tires and one plant strictly produces synthetic rubber. Finished goods are produced in sixteen plants, two sites produce retreads for the trucking and one site produces retreads for the aircraft industry. MICHELIN® Maps and Guides also produce road atlases, road maps, and travel guides for all the major cities in North America.

MICHELIN® has been a part of the tire industry in the United States since 1907 when it purchased the International Rubber Company in Milltown, New Jersey. Tires and tubes were manufactured there up until 1930 when the Great Depression took its toll on what had become the fourth largest tire manufacturer in the country with 2,000 employees. The MICHELIN® North America as we know it today took form In March of 1950. With three sizes and two different tread designs of truck tires made with metallic plies, five people started MICHELIN® Tire Corporation in New York City. There was an executive vice president, a vice president of sales, a secretary, a warehouse supervisor, and one newly hired sales representative. The tires cost anywhere from 40-50% more than the competition but their construction with metal plies bonded to rubber allowed MICHELIN® salesmen to offer a tire solution to fleets operating under the most severe conditions. This included fleets dealing with extremely heavy loads and in the sanitation business. This strategy established a reputation for durability and quality still prevalent today in the modern trucking industry.

Growth in sales led to the need for a larger facility in 1954. Developed in 1953, MICHELIN® began to import the all-steel one-ply radial truck tire in 1956. This is the tire that revolutionized the world tire market. There was interest in the radial truck, but the bulk of MICHELIN®'s sales were the older, metallic bias-ply tires. Even with steady annual growth, the annual sales volume in 1959 was less than a week's production in a modern truck tire plant.

While the radial passenger tire had been gaining acceptance in Europe with car manufacturers in the late 1950s, it would be the mid1960's before it was a factor in the United States. MICHELIN®'s worldwide growth in the 1960s was phenomenal with the opening of twelve new plants and the announcement that a plant would be built in Nova Scotia, Canada by 1971.

Two major events happened in 1966 that drew MICHELIN® into the largest passenger tire market in the world. Up until 1966, MICHELIN® had only been importing small quantities of radial passenger tires to service consumers with European cars originally fitted with MICHELIN® radial tires. That year Ford decided the 1968 Lincoln Continental Mark III would have radial tires as original equipment. Although domestic tire manufacturers had purchased the license to develop radial tires, none were successful in developing a satisfactory radial tire. Ford then selected MICHELIN® to be the supplier. This was a major boost for both the acceptance of the radial tire and establishing MICHELIN® in North America. The second major event that made MICHELIN® a part of the U.S. tire market happened when SEARS went shopping for a radial tire. In an effort to get ahead of its competition and realizing the impending radicalization of the tire industry, SEARS sought out a supplier and ultimately selected MICHELIN® for its reputation of high quality and technical expertise in building radial tires. By the end of 1969 expansion necessitated another move to a larger headquarters and the workforce had expanded to 250 people. The salesforce was now up to 103 people in the field.

MICHELIN® had led a revolution in the transportation industry with the introduction of the radial tire. As the global demand for radial tires accelerated, MICHELIN® responded with an expansion plan that opened twenty-three new plants, all producing radial tires. MICHELIN® made the decision in the early '70s to produce only radial tires and eliminate the production of the old-style bias-ply tires. Two plants had been opened in Nova Scotia in 1971 and it was announced that construction would soon begin for two plants in the western part of South Carolina. One plant, US2 in Anderson, SC, would build semi-finished products to supply the other plant that would produce tires. The plants were scheduled to open in 1975 and the very first radial passenger tire came off the line at US1, Greenville, South Carolina on March 10, 1975. A third plant, US3, in Spartanburg, SC came online in 1978, producing radial truck tires for the rapidly growing radial market in the trucking industry. Expansion in the 1970s in the U.S. was completed with the opening of US4 in Dothan, Alabama. Along with the plants, a research and development were opened the center in South Carolina because the corporation has always believed in developing products exclusively for a North American market where huge geographical distances demanded different tires than established European markets. In 1979, MICHELIN® opened a new headquarters building in Lake Success, New York to accommodate a continuously growing workforce. MICHELIN® opened the decade with 250 employees and by 1979 the number was 7,000. MICHELIN® had also expanded its tire lines dramatically from two types of tires that still required tubes to a full line of tubeless radial passenger tires to serve the growing demand for tires with greater fuel efficiency, longer life, and better handling. In 1970 there were three types of truck tires offered and the 1970s ended with an expanded line of tires to meet multiple and various needs of fleet owners, from long haul operations to fleets hauling rocks or coal. There were now radial tires for bread fleets and small package delivery fleets.

The 1980s brought the challenges of consolidation and recession to the tire industry. Fully recovered from the effects of World War II, Japanese and European countries were competing for the toe to toe with American companies in a global economy. Many smaller tire companies were absorbed by larger ones because it was obvious that you had to get bigger in order to survive. MICHELIN® had to invest heavily in the expansion of North America and it was not immune to the effects of the recession that hit the tire industry in 1980 and 1981. Serious losses were off-set by becoming more cost-conscious and better planning. There was a major competition to deal with now who were successfully manufacturing radial tires. MICHELIN® has always been a resilient company and it came out of that period stronger and smarter. Two more plants, one in Lexington, SC, and one in Nova Scotia, were opened in the early '80s. To consolidate headquarters operations and manufacturing, MICHELIN® made the decision to relocate its North American headquarters from New York where it had been since 1950 to Greenville, South Carolina. The doors opened at its present location in September of 1988.

After a careful study of market trends and monitoring the actions of its two major global competitors, MICHELIN® made the decision in 1989 to purchase the UNIROYAL® -BFGOODRICH® Tire Company. This acquisition would not only make MICHELIN® the largest tire company in the world but would provide the corporation with a portfolio of strong brands with a rich heritage in the American tire market. UNIROYAL® and BFGOODRICH® Tire formed a joint venture in 1986 to leverage each others' strengths in the original equipment and replacement market. MICHELIN® went into the '90s in a position to offer the best products at the best price point in virtually every consumer category.

More science inside. More performance on the road.  More value per mile. That is WHY we choose MICHELIN® tires here at Royson's Automotive for our drivers in Blythewood, SC and the surrounding areas.